Sometimes what seem like inconsequential annoying things all add up to one big thing, or as I put it to my doctor, sometimes what appears to a bunch of random, isolated stars turns out to be a constellation, when you stand back and look at the whole picture.

Well, today I have officially joined the ranks of people who have “invisible chronic illnesses.”  I don’t look unhealthy.  Heck, most of the time, I don’t even feel unhealthy, but there is a problem, it’s genetic, and at times, it can be painful.  You just can’t tell by looking at me. 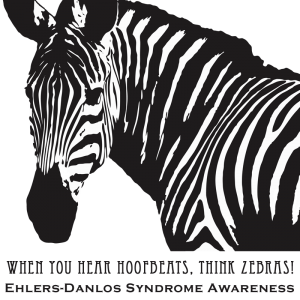 A while back I saw the doc for a suspected abdominal aortic aneurysm.  One of those “probably nothing, but better safe than sorry” type situations.  I noticed that I could feel something pulsing strongly in my abdomen, and so did my doctor.  It was clearly my abdominal aorta, but it’s unusual to be able to feel it so easily.  She ordered an ultrasound, and thankfully, my aorta turned out to be normal (just easily felt).  Big sigh of relief!

*However*, while I was waiting to find out if I had an old man’s disease, I was reading on reasons why a young(ish) woman might have an AAA (esp. with family history), and saw that in young people it’s often a sign of a connective tissue disorder.   One was Marfan’s Syndrome (easily ruled out), and the other was Ehlers-Danlos Syndrome.

Ehlers-Danlos Syndrome (EDS) is a genetic connective tissue disorder where the body makes faulty collagen, resulting in laxness in joints and tissues, easy injury, and in some, rare, severe cases, death.  Think about it.  Collagen is in pretty much every area of your body.  Your skin.  Your organs.  Your blood vessels.  Your Muscles.  Your ligaments.  If the stuff that holds those together is faulty, you’re going to have some issues.

Now, after reading a little bit about EDS and it’s symptoms, my first thought was to dismiss it out of hand.  First of all I have *never* thought of myself as being flexible/hypermobile, and secondly a lot of the pictures I found online showed people with distinctive facial features, which I don’t have, and thirdly, I didn’t have any of the super severe symptoms some of the people talked about having.  Some people are totally debilitated by EDS.  I am not in constant pain.  Most of my complaints have been annoying and yes, sometimes painful, but fairly minor in the grand scheme of things, and usually off and on.  I had almost ruled it out entirely, but then something prompted me to keep reading, and the more I read about the great variance in symptom manifestation among patients, the more I saw myself in some of the other symptoms.

One of those “Ohhhhhhhhh….” kind of moments.

I could go on (there’s a lot more than just these symptoms), but you get the picture.  Basically my tissues and ligaments are just not as strong as they should be, and are easily inflamed/injured.

Now, of course, almost all of those things could also be explained in other ways, BUT after I stepped back, and really looked at the list, I knew it was time to stop wondering and actually ask a doctor, even though the aorta question had been resolved.  My biggest concern was the fact that if I did have it, the kids have a 50/50 shot of having it, and if I had the Vascular type of Ehlers-Danlos (for which I did have some symptoms), and Jade also had it, it could impact her if she ever has her heart surgery.  A lot of “ifs” there, but I knew I needed to find out for sure, one way or another.  Again, better safe than sorry.

My doctor, who as it turns out actually has another patient with EDS, went over my list of symptoms (some of which she’s actually treated me for), and agreed that there was definitely more than enough cause for testing, and so she referred me to a Geneticist at UVA.

I want to pause here and say I am VERY thankful that there are geneticists with experience in Ehlers-Danlos and other connective tissue disorders, this close by.  Extremely thankful.  From reading other people’s stories, it looks like a lot of people have to travel out of state to find a specialist that is experienced with EDS and other connective tissue disorders, and who will know how to thoroughly test for connective tissue disorders.  Not all Geneticists are familiar with EDS, and don’t always know how to test thoroughly for all the variations that can occur with this disorder (there are 7, to date).  Not only is the Genetics Department at UVA well versed with EDS, they’ve actually published some pretty interesting papers on the disorder, and in particular, the different variations within the types.  And all only 1 hour’s drive away.

Anyway, the week after my initial doctor’s appointment, I went to UVA to see Dr. Humberson (who is absolutely wonderful, by the way), and after going over my medical history, what family medical history I know about, and doing a through physical examination, she told me she’s positive I have Ehlers-Danlos Syndrome.  She also pointed out some additional symptoms I didn’t even know were symptoms or even not normal.  My ridiculously high arches are a symptoms, as are my hyperactive deep tendon reflexes.  Go figure.  She also verified the Reynaud’s Phenonmenon diagnosis as well as confirming that yes, my funky heart rate and blood pressure issues are likely POTS (Postural Orthostatic Tachycardia Syndrome) – something my Primary Doc later also confirmed.

Dr. Humberson believes I am Type I, or the “Classical” type, although I do have some crossover symptoms from other types – which is not uncommon in Ehlers-Danlos.  From what I’ve read, actually few people actually fit solidly and neatly into one symptom category.  I will be going back to have a blood test to rule out Type IV, which is the Vascular type (for which I do have some symptoms, and family history that points to Type IV), and the one that is the most dangerous, because of the increased risk of vascular and organ rupture.  Due to some of the other side symptoms I have, she also ordered an MRI of my head/neck/spine and an echo to rule out issues like Chiari Malformation, Tethered Cord and an Echocardiogram to rule out heart issues like mitral valve prolapse and aortic root dilation (which are common in EDS patients).

So what does this mean?  Well, for me, so far, not a whole lot, frankly.  After I have the results of the blood test, MRI and Echo, I’ll have a better idea of just how I’m going to be impacted by this.  But over all, you can’t really treat a collagen deficiency.  You treat the symptoms, if they get bad enough to need treatment (and some of mine have), and you are monitored by docs to keep an eye out for possible complications.  Thankfully, my symptoms are relatively mild – at least at this point.  And by “mild” I mean I’m not needing prescription pain medication nor am I debilitated or disabled.  I definitely have pain most days, but I can manage it with over the counter pain relief, so far.  And my other issues can be controlled by prescription meds and supplements. So far.  So “mild” is definitely a relative term here, but I’m choosing to be thankful that it’s not as bad as it is for a lot of EDS patients.  I can walk.  Therefore I am thankful.

I’ll need to be mindful that I’m prone to injury and be careful not to overdo it.  I’ll need to just know that I may experience some signs of joint and tissue aging sooner than most people my age.  Collagen production breaks down for everyone as they age.  If someone already have a deficiency, they’re going to notice that breakdown sooner.  I’ll need to see a cardiologist every year or so, just to watch out for mitral valve prolapse, or any of the other heart/vascular complications of EDS. And should the joint pain get bad enough, at some point, I’d need to see a rheumatologist. Thus far, like I said, I’ve been very fortunate, but I need to realize that may change, and take symptoms seriously.

The important thing for me is *I know*.  When I get a new symptom, I know it’s part of the disease, and to get it checked out instead of just trying to write it off with a “Huh, that’s weird.”  For instance, when I walked around for a year with a hernia before getting it checked out. I know I need to be a little more careful about straining my muscles and tendons.  I know that it’s that much more more imperative that I keep my blood pressure  and heart rate issues in check.  I know I need to stay as active as possible to keep my muscles strong, therefore keeping the load off my joints and ligaments.  I know to look out for symptoms in the kids.  I know to have them tested if I start to see symptoms present.   And now that it’s officially a diagnosis, if any other family members present with symptoms, they’ll be able to go straight to their doctor with, “My sister/daughter/cousin has Ehlers-Danlos, and I think I may have some symptoms, too.”

They have a really great PDF, “So you think you have Ehlers-Danlos Syndrome“, that goes over what EDS is, how it’s inherited and goes into the common symptoms.