I’ll need to back up a little bit, since I haven’t done an update in a while. At the last update, Jade had seen her allergist and, after confirming she has no allergy to wheat or corn, he had referred her to a Pediatric GI at UVA, to have her tested. Well they were pretty booked, so her appointment was not until September.

At that appointment he said he wanted to test her for Celiac Disease. This was something we’d considered and were hoping would NOT be an issue for her. Allergies you can grow out of. Intolerances to gluten, can also be temporary. Celiac disease means no wheat, rye, spelt, barley and oats, and sometimes even corn, for LIFE, or you risk severely damaging your digestive system. There’s no growing out of it. Needless to say, we were hoping this would NOT be the case for Jade.

Also, anytime you have a child with digestive issues as well as very poor growth, they test for Cystic Fibrosis. Now, chances were VERY remote that she’d even have that, having been screened as a newborn, as well as being part Asian (lowers the risk), so I wasn’t really super worried about the results of that test, but just the same, it’s another life-long ailment that would have had very serious ramifications for Jade. No matter how remote the chances are, there’s always that thought in the corner of your mind of “…but what if it’s positive? Doesn’t anyone ever really *expect* their kid to have something like this?” So I admit I was a little anxious to get the final word on that.

For the Celiac Test, they have to test the blood for the presence of gluten antibodies. Since I had been not giving Jade any wheat, they said that she’d need to be eating wheat every day for about a month for the test to even work. Can’t have gluten antibodies if you’re not ingesting gluten. Meanwhile he put forth another theory as to what he thought might be going on with her little system. He said that since Jade cannot have dairy or eggs, she is missing out on a great deal of fat and protein that is in most kid’s diets. The absence of those fats and proteins means there was an imbalance, and too many carbohydrates in her diet. So, he thought it’s possible that it might not be wheat, itself that she’s reacting to, but to just too many carbs and not enough fat. So he suggested giving her lots of wheat, while we prepared for the test in October, and meanwhile to put fat into EVERYTHING. They way he put it was, if you give her rice, put margarine or oil on it. If you give her a piece of bread, fry it in a pan first.

Of course my first thought was he was nuts. For one thing, this runs counter to what we’re told about our kids’ diets, in general. Not only that, but it’s not like we eat low fat at our house. It sounded really odd to have to add lots of fat to *everything* I give her to eat. After a while of thinking on it, though, it kind of made sense. I mean what does fiber do? So what would too much fiber do? Yeah. That’s right.

So we began our month of wheat and fat. Of course, as any parent of a toddler knows, having something they HAVE to eat is going to be an uphill battle. It was really hard to get her to eat the stuff we were pushing, consistently, but we kept at it, and found things that she really seemed to like, and what do you know? She had MUCH less digestive upset than I was expecting from re-introducing wheat, and started gaining weight more steadily. If she got wheat without as much fat (for instance, if she just refused to eat the fatty stuff, but at some of the wheat stuff) she had icky diapers.

When we went to the appointment for the tests, we were pleased to see that she had gained over a pound in the 4 weeks since we started adding the extra fat to her diet. Of course Jade reacted to both tests in true feisty Jade fashion. The CF test was a simple sweat test. Not in any way painful – just a couple little sweat collecting strapped sensors on both arms. But boy, you would have thought they were putting hot branding irons on her the way she fought and screamed and kicked. My goodness that girl is tiny but incredibly STRONG and strong *willed*. Of course, as you can imagine, the blood draw for the gluten antibody test didn’t go much better.

Well, I finally got tired of waiting and called UVA to see if the results were in. They just called back and told me that *both* tests came back normal. HOORAY!!!!

Now, they did caution us that sometimes kids this young will have a false negative, so if it comes to a point that she starts having issues again and adding more fat doesn’t seem to change it, we may have to have her re-tested, but barring that, she’s cleared to keep on eating wheat and other grains (everything but oats, which she’s allergic to).

Yet another testament to God’s mercy in Jade’s life. Not that a positive test would have meant He wasn’t good, but we’re just incredibly thankful that she’s been spared what would have been (in either case) a lifelong condition. And really, how awesome is it that the solution to her issues is to eat lots of yummy, fatty stuff? It’s actually been kind of fun figuring out new things to try that she’ll actually eat and like. Last night Alvin made homemade donut holes, and this morning, I made a treat for her out of Chex cereal, peanut butter, margarine and honey.

Of course, Alvin and I need to watch it, as WE certainly don’t need any additional fat in our diets. :-p 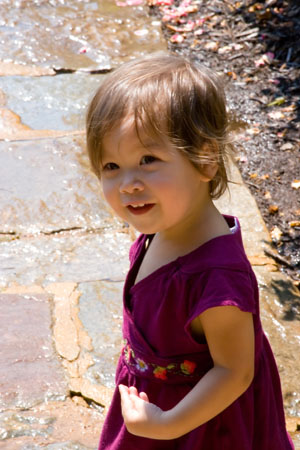 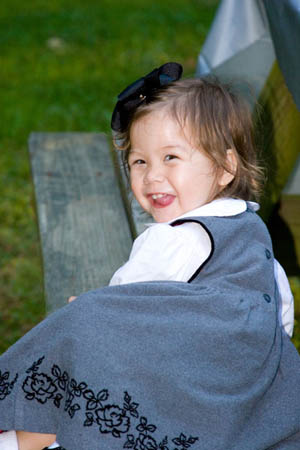