The catheterization procedure went well. No issues, no complications. It did take Jade almost the entire observation period to wake up, but that didn’t surprise me, because I also take a long time to wake up from anesthesia, so she must take after me.

We learned a few things today:

In short, not only do they want to put off surgery, but at this point, it looks like she may never need surgery. The doctor said there is *small* chance that things could change as her heart grows, but *most likely* things will continue to improve so now they don’t think she’ll need an operation. Praise God!!

Alvin and I haven’t quite wrapped our mind around that yet. We’ve gotten so used to the idea that she (according to the doctors for months now) would *definitely* need surgery, that suddenly being told she most likely won’t is just weird to us. It’s almost like we don’t want to let ourselves really believe it, because we’re afraid something will change again. I think it’ll sink in soon, though.

She will continue to see her cardiologist, then gradually going to a once every 6 months schedule, and then maybe even once a year after a while. She will also, as she gets older, likely need antibiotics before any dental visit – to prevent bacteria from her mouth from going to her heart through any bleeding from dental work/cleaning. This is fairly common for kids with a VSD, even a mild one, so that’s not surprising.

Oh, a couple other things we learned today – Jade is a lightweight and an angry drunk. The sedative they gave her was supposed to work in 10-15 minutes, but we saw the effects immediately, but while it did seem to mellow her it did not make her in any way more cooperative while they prepared her for the procedure. As long as they left her alone, she was loopy and happy, but as soon as they tried to mess with her, she would get angry. She fought them the whole time they were putting on the numbing cream for her iv and catheter sites, weighing her, checking her vitals and then she eventually just conked out, but continued to fuss and cry if she was messed with, even in her sleep. Of course the general anesthesia knocked her out enough that they didn’t have any issues performing the procedure – everything went according to schedule.

She spent the entire recovery time (while she was sleeping) fussing and fighting at me anytime someone came to check her bandages or her blood pressure. She’s quite the feisty little girl. Even though, she *still* managed to charm everyone who saw her, even getting visits from nurses who weren’t involved in her case. Once she was awake, she was her sweet self again, for the most part, and giving Bronx Cheers to anyone who’d look at her.

Thanks so much for all the thoughts and prayers offered up on her behalf! God has heard and granted those requests.

We still need to sort out what’s causing the feeding and weight issues, but at least we’ve ruled out the heart. Who knows, perhaps she’s just destined to be a tiny girl and eat like a bird. We’ll probably take her to a pediatric gastroenterologist if she continues to have issues.

Here are some pictures from the day…

Jade with Dad before we went back to the Cath Lab: 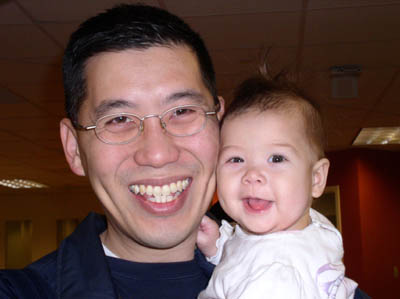 Jade feeling the effects of her sedative: 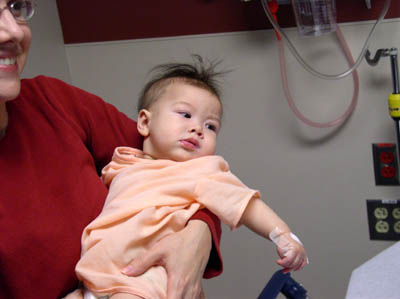 “Stop MESSING with me”: 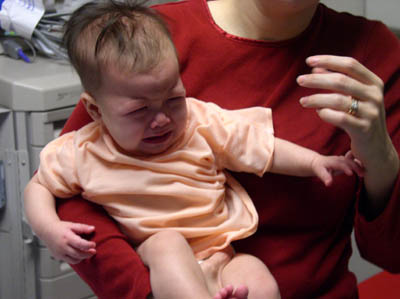 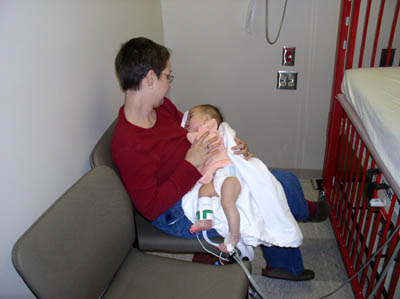 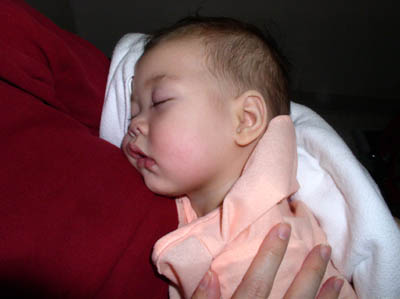